Firstly, a clutch of eggs guarded by each male (the female was removed from the tank after spawning) was measured to determine the size of the egg clutch. This was done on the 2nd day after spawning (every time, to control for developmental effects). The clutch was briefly removed from the aquaria, photographed beside a ruler, and returned to the aquaria. 24 hr later, the clutch was removed and photographed again. This was done to determine the natural rate of clutch decay over a 24 hr period. This was the control, as no predators were present in the aquaria at this time.

When the next clutch of eggs was produced (1–2 weeks later), on the second day post-spawning (again, the female was removed immediately after spawning), the egg clutch was removed, photographed and returned. We also measured 2 behavioural traits of the male at the same time. Firstly, we captured the male with a dip net and removed him from the tank for 10 seconds (held in open air) before returning him to the tank. We then recorded how many seconds he took to return to guarding his eggs. We treated this as an indication of his speed to return to his eggs. Secondly, we recorded over a 15 minute period, how much time he would spend guarding his eggs (his attentiveness).

The following morning, we removed the oriental weatherloach, removed the egg clutch and photographed it, and returned it to the aquaria.

This first trial with an oriental weatherloach was conducted with a naive weatherloach. As such, both participants were completely naive.

The trial was repeated again (1­–2 weeks later, with a third clutch of eggs). This time, both the male gudgeon and the weatherloach had previously experienced each other (although oriental weatherloach were randomly assigned to males, so it is unknown if the exact same individuals were re-acquainted).

The response variable in this experiment is the proportion of eggs lost from the clutch between the first and second measurement (eg. day 2 and day 3 post-spawning). The treatment effect has three levels (control, naive, and experienced). Additional covariates were not included due to the low number of fish used in each trial, despite there being interesting levels of variation between males. Because each male was used three times, fish ID was included as a random factor (random intercept).

Generalized mixed modelling revealed that there was a significant increase in the area of egg mass consumed in the first trial (naive) compared to the control. There was no significant difference between the second trial (experienced) and the control. 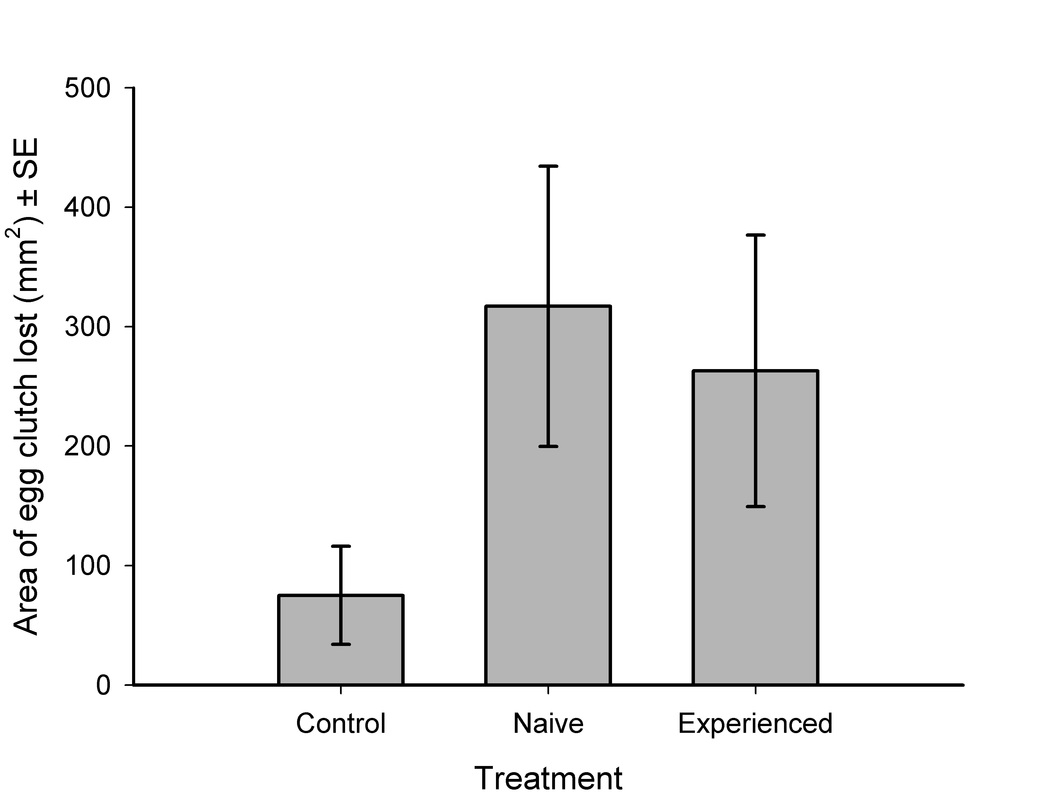 Change in egg clutch area by treatment. The inclusion of a weatherloach to a naive male gudgeon resulted in a significant increase in the number of eggs lost over a 24hour period.
Discussion:

These results are very preliminary. Limited conclusions can be drawn from this study, however, it does indicate that oriental weatherloach may pose a threat to native fish eggs, even in the presence of a guarding adult. The role that repeated experiences between both the predator and the guarder remains to be seen. Both learning and co-evolution could play a big role in determining the outcomes of these interactions, and is a fascinating area of future research.

Observations made during this study revealed that male purple spotted gudgeons vary greatly in their aggression towards oriental weatherloach. Some were truly ferocious, while others paid no notice. Likewise, some weatherloach appeared to be more predatory than others. Observations were made of oriental weatherloach consuming eggs, both when a male gudgeon was present, and in a separate trial when the male was removed.

Aquaria trials are a useful way to obtain some preliminary information, however the restricted size of the tanks and limited opportunities for male gudgeons to choose an optimal nesting site may play a bit role in the risk of egg clutches to predation. Exploring this phenomenon in a more natural setting is recommended for future studies.

Future studies should look to incorporate aspects of both male gudgeon and oriental weatherloach behaviour to determine where individual-level behavioural traits may play a role in determining the outcomes of these interactions. Multi-generational studies could look to determine if co-evolutionary responses occur in one or both species.

Data for this study was collected as part of an undergraduate research project by E. Sima. Statistical analyses undertaken by D. Starrs. Funding for this project was generously awarded to D. Starrs by the Linnean Society of New South Wales.